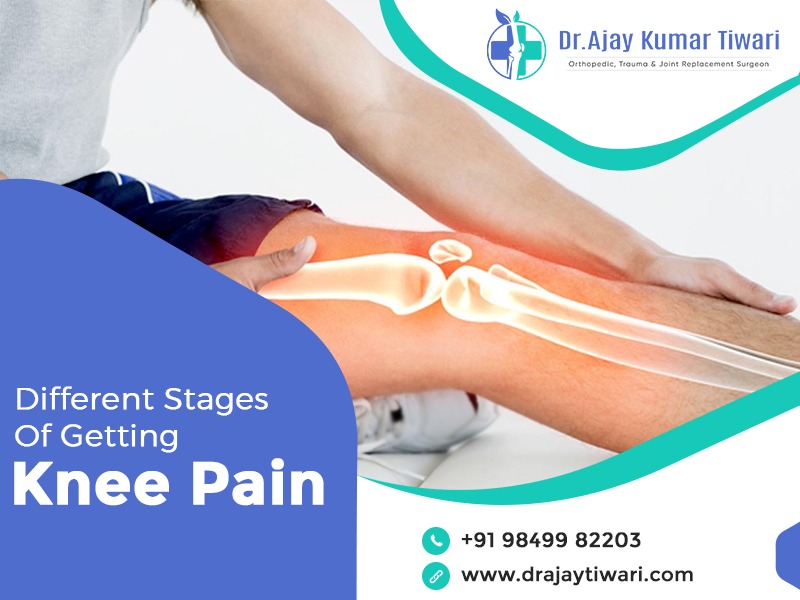 Different stages of getting Knee Pain

Knee pain is one of the common problems facing by many people that can develop due to the damage in any of the bones making up the knee or the kneecap or the muscles and ligaments of the knee. Any physical activity that strains your knee may aggravate knee pain. Obesity, Arthritis, trauma and some problems can also trigger knee pain. People of any age can be a victim of knee pain, and home remedies can provide relief as long as the pain does not become severe. Facts you should know about knee pain There are a variety of causes of 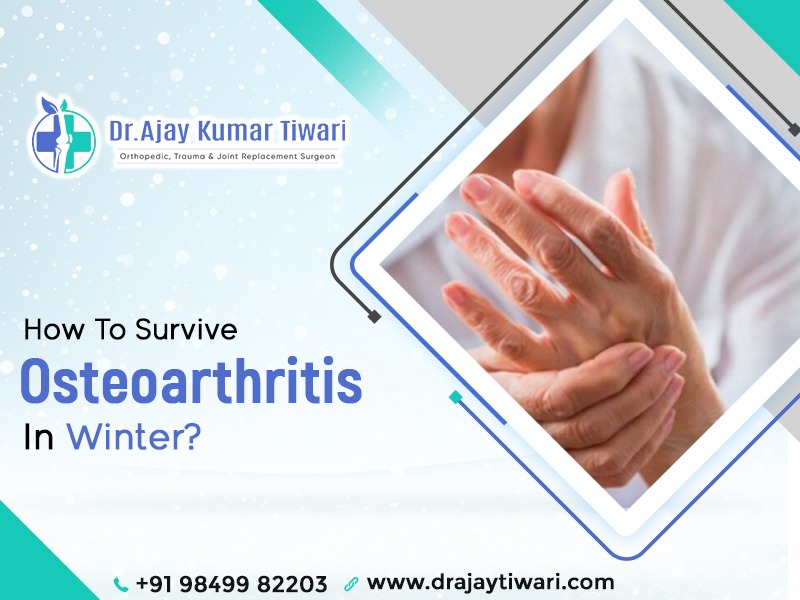 How to Survive Osteoarthritis in Winter ?

Arthritis is an inflammatory condition related to joints. Osteoarthritis is the most common form of arthritis, and it occurs when the cartilage protecting the bony ends of a joint wears away. The tendons and ligaments must work hard due to the absence of cartilage protection, and if the cartilage is severely damaged, the bones rub against one another, resulting in friction. Eventually, it leads to swelling & inflammation. A joint can also be affected by arthritis when parts of it are identified as 'foreign' threats, making it the target of the immune system - such as rheumatoid arthritis. Although older adults 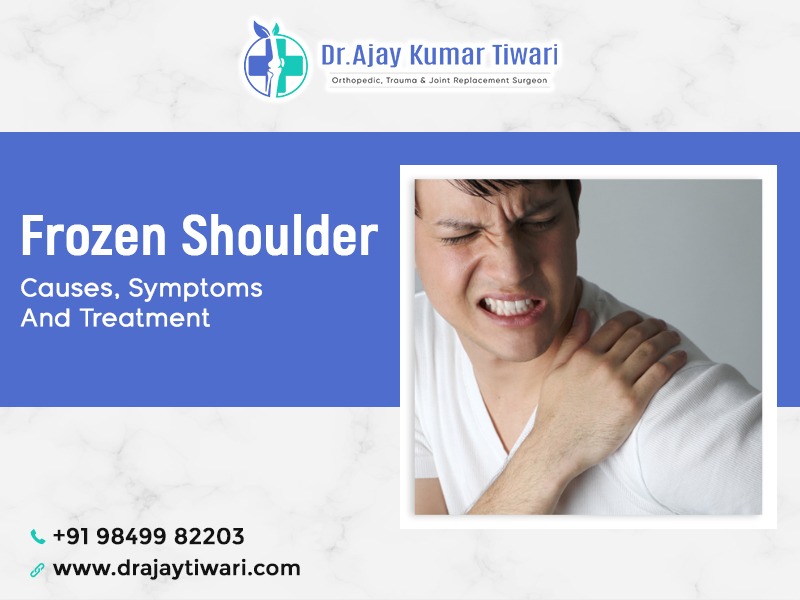 Our shoulders are the most used joints in our body. Often they are prone to various conditions that impair the movement of the shoulder. Adhesive capsulitis is one such condition that is commonly known as frozen shoulder. It is a common shoulder disorder that causes intense pain, stiffness, and reduced mobility. If you fail to treat your condition properly, it can become severe and debilitating over time. Women are more vulnerable to this condition compared to men, and it mostly affects people between the ages of 40 and 60. However, under the supervision of a physiotherapist and shoulder surgeon, it is 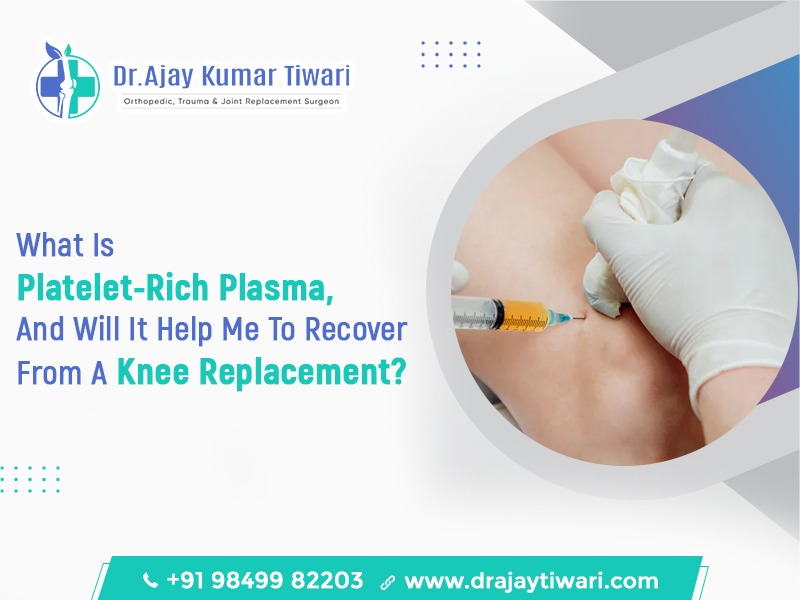 What is Platelet Rich Plasma ? Will it help me to recover from a knee replacement?

Knee arthroplasty is considered successful when the tissue is completely healed, the pain is controlled, and the joint functions properly. The major concerns of a knee replacement are bleeding, infections etc. In order to overcome these problems, fibrin glue is initially used. Due to the fact that it is derived from human plasma, it has shown positive results in terms of contamination and immunological reactions, as well as bleeding control. Although fibrin glue appeared to have good initial results, considering the possibility of cross-contamination and the difficulty in acquiring this compound, experts suggested using concentrations of autologous platelets, also known as 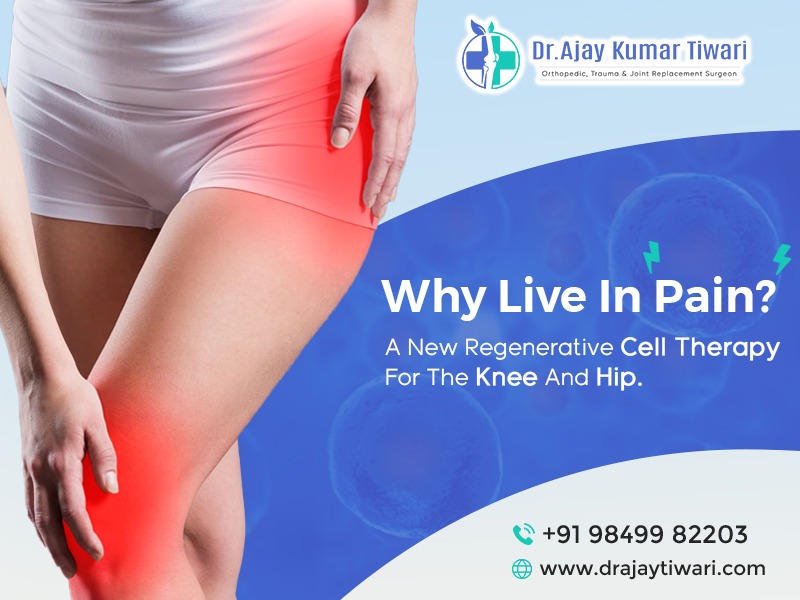 Why live in pain – Regrow A new regenerative cell therapy for the knee and hip.

Over the past few years, "regenerative stem cell therapy" has been touted as a miraculous treatment for a wide range of conditions, from facial wrinkles to several orthopaedic diseases associated with the spine, knee and hip. There has been an increasing interest in the development of regenerative therapies because of their ability to reestablish the normal structure and function after a tissue injury. The primary goal of these studies and treatments is to heal damaged tissues that are irreparable by our body's own repair mechanisms. Stem cell therapy has the potential to treat knee osteoarthritis (OA) effectively. Cartilage plays a vital 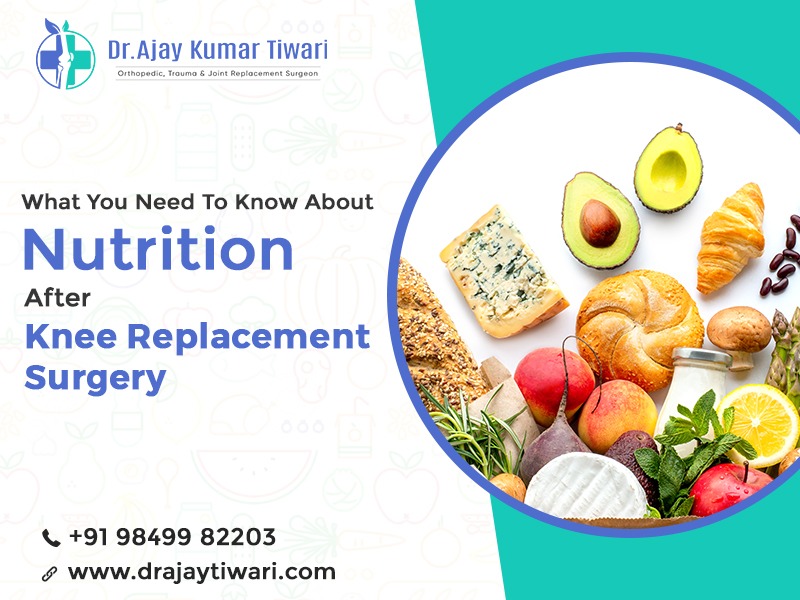 What you need to know about nutrition after Knee Replacement Surgery ?

In order to ensure a healthy recovery following orthopaedic surgery, such as knee replacement or fracture treatment, along with getting plenty of rest and taking proper care of the wounds, you should also consider good nutrition. Orthopaedic surgical procedures can put your body under extreme stress since your body's metabolism speeds up during the healing process. A well-balanced, nutritious diet is very important for healthy tissue growth, healing, and quick recovery. Following are the nutrients that serve as building blocks following knee replacement surgery and ensure a rapid and healthy recovery. Most of the required nutrients can be obtained naturally from 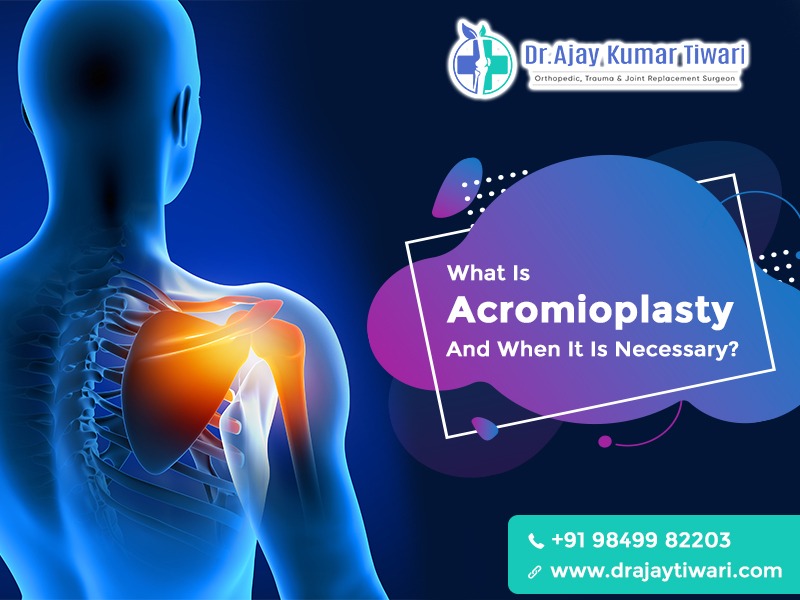 What is Acromioplasy and when it is necessary ?

An acromioplasty, also called subacromial decompression, is a keyhole surgery that involves shaving away the undersurface of the acromion. The acromion is a triangular-shaped bone located in the shoulder which extends out from the shoulder blade to the top of your shoulder joint. It provides attachment to the trapezius and deltoid muscles around the shoulder.  The acromion forms the acromioclavicular joint along with the collarbone, and it is also attached to the scapular spine. Repeated shoulder movements cause the acromion to rub against the muscles (tendons) in the shoulder, possibly damaging it.  This acromioplasty tends to create room for the rotator cuff 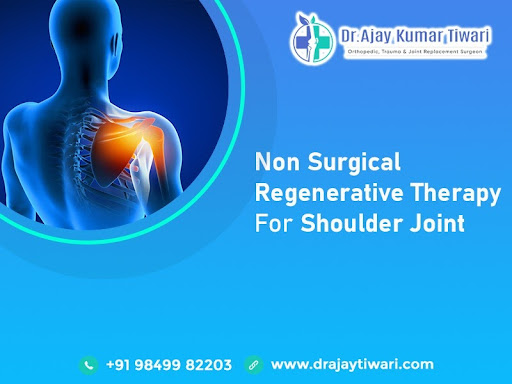 Our shoulders are flexible joints and they are susceptible to many problems like rotator cuff injuries, tendon tears and several other shoulder joint conditions that are painful and disruptive. Often this makes you feel uncomfortable or makes it difficult to complete even simple tasks. If you're looking for a non-surgical approach to treat your shoulder pain, PRP may be an option for you. Dr. Ajay Tiwari, chief consultant, Orthopaedic Doctor & Joint Replacement Surgeon at the Centre of Orthopaedics – Deccan Hospital, Somajiguda is proud to offer advanced PRP therapy for joint pain in Hyderabad.  Find out if PRP injections may 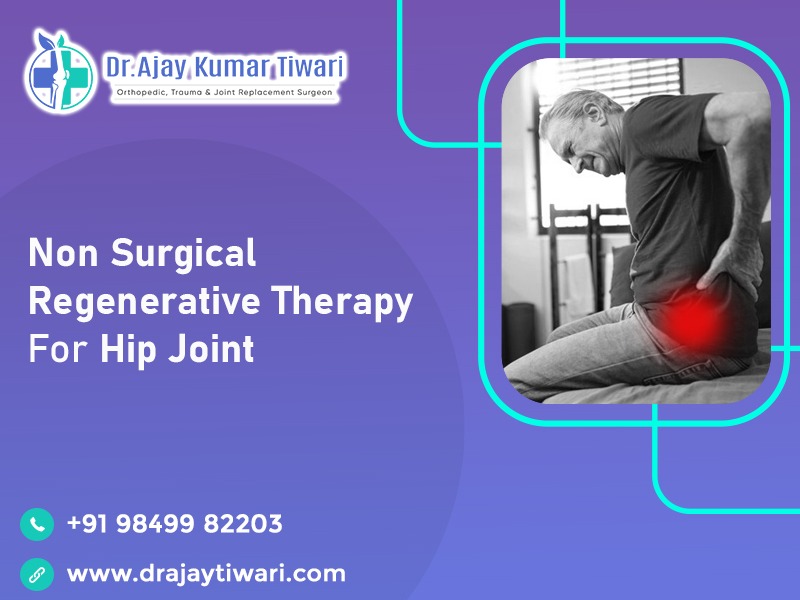 Platelet-Rich Plasma therapy is one of several therapies that come under the category of "regenerative medicine." The major components of blood are red blood cells, white blood cells, and platelets that are carried by a liquid known as plasma. Platelets are primarily responsible for clotting the blood. In addition, platelets contain other important components like proteins and growth factors that promote tissue healing and cytokines responsible for various cellular functions. Platelet-rich plasma (PRP) is a serum obtained by centrifuging the blood sample of the patient who wants to undergo PRP therapy. Platelets are separated from the blood cells in the centrifuge. The 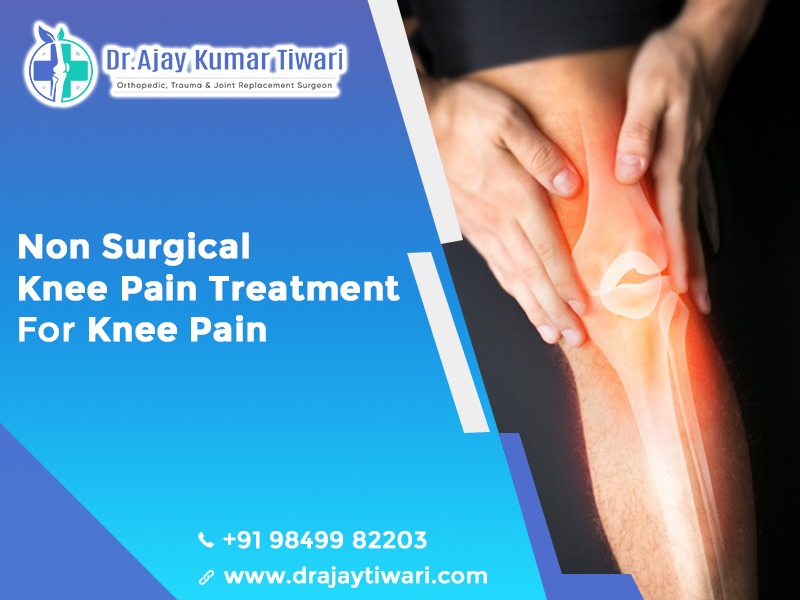 Platelet-rich plasma (PRP) therapy has revolutionised the field of orthopaedic medicine that uses platelet growth factors to regenerate tissues. The PRP technique is recognised throughout the world as a modern & innovative treatment strategy. In small amounts of plasma, platelet growth factors are highly concentrated.  Various forms of PRP have proved to be among the best treatments to enhance tissue regeneration. PRP has been introduced in regenerative medicine as it comprises two of three important components (growth factors and scaffolds) essential for the complete regeneration of tissue. Platelet Rich Plasma (PRP) Platelet Rich Plasma (PRP) is said to be a version of a